After a long and successful career in education and sport, Colin became a full time artist in 2006 and now works from his studio in Lockton, in the idyllic surroundings of the North York Moors National Park. He is well travelled, keeping journals, sketches and photographic records from across Europe, Scandinavia, North and South America, Mexico, Nepal, China, India, Australia, New Zealand and the Antarctic.

Colin is experimental in his work and uses oils, pastels, watercolours, inks and mixed media to interpret his view of the world. He enjoys nothing better than the challenge of coming out of his comfort zone and learning from the techniques and experiences of other artists from cave paintings to his contemporaries. He strongly believes that it is this progressive open minded attitude that prevents him from stagnating and assists him in his development. He is a passionate environmentalist, conservationist and has been a pesco-vegetarian for almost forty years. He is not constrained by one type of subject matter or technique and will tackle anything that inspires him and fires him with enthusiasm.  He is a regular visitor to galleries and studios wherever he travels in the world, but he especially enjoys the diversity of London and venues across the U.K.  He firmly believes that all artists can learn from each other even if their ideas, techniques and passions are at variance with each other.e

© Colin Culley - The copyright for all the images on this website remain the property of Colin Culley and may not be reproduced in whole or in part, without the artist's permission. 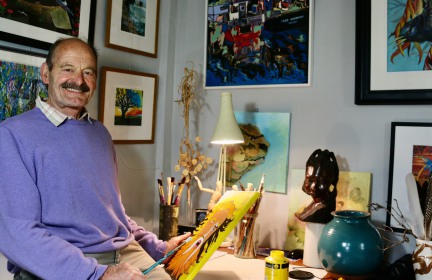 If you would like to visit Colin's studio please contact him to make an appointment.  See contacts page for directions.

This year Colin will be participating in the North Yorkshire Open Studios event and the Lockton Artists Open Studios, both in June of this year.  A great opportunity to meet him and see his work in his studio.

These are the nine artists participating in the Lockton Artists Open Studios in 2020.

ARTIST IN RESIDENCE WITH FORESTRY ENGLAND

Colin has also been selected for an 'Artists Residency' with Forestry England based in Dalby Forest, North Yorkshire.

Full details will be posted later this year.

This experience was a completely new one for Colin.  The painting below on the left is the End product of an 'Intuative Abstract Painting' workshop with Jackie Midgley.  Expression without an end goal in mind.  Pushing the boundaries of colour and tone, creating contrast and depth.

The process began by making random marks on paper and joining them up in an haphazard way.  Elements were then taken from that 'Jackson Pollock' confusion and incorporated into the next version. This continued over a series of seven or eight paintings until it stopped at this version.

The 20th September 2019 saw the 'Global Climate Strike' kickstart a week of global action across the world. There were strike events in at least 137 countries. Colin and his wife joined the march in Whitby and he was surprised and delighted at the end of the route when his banner was selected for a prize.

"The fact that you can only do a little is no excuse for doing nothing."

As a student Colin was fascinated by Japanese prints and he used to copy elements of them into his sketch books.  An example from that period is on the right.  Watercoloured interpretations of prints sold very well for him at that time. More recently he has been studying the work of Katsushika Hokusai and this has set him off on a new path.

In the series of paintings below he is looking at his local environment through 'different eyes' and then imagining what a kimono might look like incorporating the colours and shapes from those paintings.

To produce this fabric design for a kimono Colin used the colours and shapes from 'A fine view'.

Again, Colin has incorporated the colours and shapes in his 'Beggars Bridge' painting to design a pattern for a kimono.

The beggars Bridge is located just outside the picturesque village of Glaisdale, within the North York Moors National Park.

Oyster catchers are a common sight along this coast line creating wonderful patterns accommpanied by their distinctive noisy calls.

Colin's kimono design reminds one of a 'Jackson Pollock' creation!

This summer Colin visited the British Museum to view the 'Manga' exhibition which he loved and it has inspired him to work on some new designs and a major project.  Full details will be posted later in 2020.

A competition was held in 2019 to design the cover for an anthology of poems and short stories by the Castle Writers of Pickering, North Yorkshire.  Colin's design was chosen and he was presented with his award in Pickering Library.

The design on the cover of the book

The formal presentation of Colin's prize, a bottle of champagne, was held in Pickering Library.

At the beginning of 2019 Colin visited two exhibtions showing the work of Elisabeth Frink.  He found her sketches of horses, on display in the 'Lightbox Gallery' in  Woking, particularly inspiring.  The two paintings below were inspired by her work.

A Symbol of Freedom

An on-going project of fabric designs

Colin recently completed a series of fabric designs inspired by a visit to the 'Arts and Crafts' home of William Morris, 'Red House' in Bexleyheath, and by the wonderful 'Art Deco' interior of 'Eltham Palace', Greenwhich.  This is an area of creativity that appeals to him and which will be developed further during 2020.

Print | Sitemap
© Colin Culley - The copyright for all the images on this website remain the property of Colin Culley and may not be reproduced without the artist's permission.
Login